FELIX RODRIGUEZ, 69
Infiltration team
From his safe house inside Cuba, Felix Rodriguez remembers the shock at seeing
television reports of the the camouflaged Bay of Pigs invaders being rounded up,
hands behind their heads.
Rodriguez, the current president of Assault Brigade 2506, had been smuggled into
Cuba weeks earlier and had been supplying the underground movement with arms and
equipment -- waiting for orders to join the fight to topple Fidel Castro's
government soon after the invasion was launched.
"The Americans never informed us the invasion was on its way; I was caught by
surprise,'' he said. Instead, Rodriguez said Castro launched a massive crackdown
across the country.
"They began rounding up everybody suspected of being part of the opposition.
There were as many as 100,000 activists held in sports stadiums and inside the
famous Blanquita Theater.''
Rodriguez found himself trapped with no way out of Cuba.
"I would call people on the phone who had been working with me and no one would
answer. Or someone would answer and encourage me to come right over -- a trap.''
After several tense days, a Cuban woman working with the Brigade infiltrators
helped him get to the Venezuelan embassy in Havana, where he sought political
asylum. "If it wasn't for her, I would have been caught and killed,'' he said.
"The invasion was a total disaster.''Bay of Pigs veteran, Felix Rodriguez poses at the Bay of Pigs Museum in Little Havana. He is a member of the Bay of Pigs Veterans Association, Brigade 2506 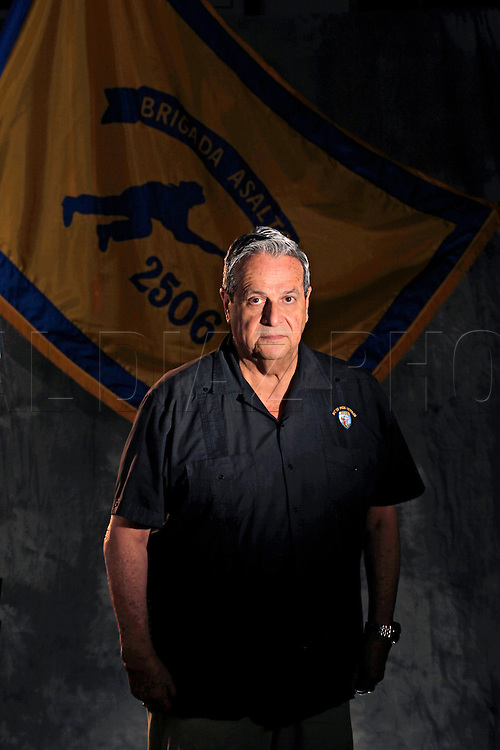